Steven Bray, a 35-year old man, won the £50,000 National Bingo Game Jackpot at Mecca Bingo Oldham on Tuesday, 5th of June 2018. He was overjoyed to be announced as the winner as he expressed his love for bingo. 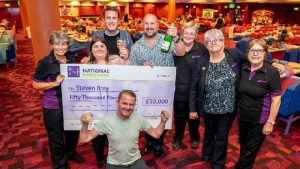 Steven joined the Oldham club seven years ago after he was introduced to bingo, as a pastime activity, by his now late parents. They were both ardent lovers and players of the game. His mother died of a heart attack in July 2011 when she was 55 years of age, while his father died in September 2017 due to the same condition.

He goes to Mecca bingo once or twice a week for the past seven years. During this time, he spends the night there having fun and playing the game. He said, “I have won a few times but this is the first time that I have won such a big amount of money.” It was a breakthrough after years in the game.

Winning the jackpot shocked him. Immediately after being announced as the winner, he said that he was still getting used to winning such a big amount. He attributed his win to his parents by saying “my mum and dad never won such a large amount of money when they were alive, so maybe the win is a gift and bit of luck from them.”

He has a busy lifestyle in which he has taken two jobs to better sustain himself. He works as a high controller for a fire station. He spends most of his time working and the only way for him to relax is by playing bingo. Coming to Mecca Bingo for him amounts to a relaxing break. He said that engaging in bingo is a thrilling experience and he loves the moment when players are waiting for the last number to be called. Steven also enjoys meeting new people at the game and this keeps his life at a balance.

At his announcement as the winner, the whole club marveled to be one of the £50,000 Jackpot winning clubs in the National Bingo game. The at the club went into cheers and jeers when they heard that Steven had won the huge amount of money as they came to him hugging and congratulating him.

According to Alastair Stewart, the business development manager at the national bingo game, the new game in which Steven won started on the 30th of April and will have lucky players winning varied monetary prizes. He narrated that the game offers a house price in every club and jackpot prices of £100, £1,000, and £50,000 on every game. He was glad that Steven was the eleventh winner of the £50,000 jackpot since the game was started.

Steven had come to Mecca Bingo that evening to enjoy himself and take a break from work. He hoped to relax with his colleagues who are bingo players and lovers participate in the game to derive fulfillment. When the moment for the last numbers to be announced, Steven could not hold his joy that his seven years in the game had yielded a mega win.

When asked what he was going to do with the money, Steven said that he would first hold a celebration party in his house and all expenditure would be on him. He would host his family members and friends and have them celebrate his win.

Steven also said he would use part of the money to pay off his mortgage. He has also wanted to go for a holiday in the Maldives since he was young and with the win, he will comfortably fund the trip.

Alastair Stewart was glad to hear that Steven was using the money for a good cause which he called “the true bingo style.” He wished him the best.